Tune in to a collaborative science education event on March 13. 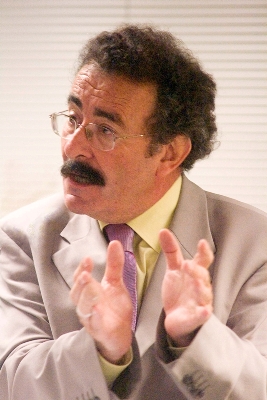 Teachers and students from New Zealand and the Cook Islands will have the chance to engage with eminent scientist Lord Robert Winston on March 13.

TALKFEST 2014 is brought to you by LENScience and Gravida, and aims to provide an interesting and engaging way of looking at two science themes.

Part of the LENScience Connect Programme, this event focuses on science for which Lord Robert Winston is well-known: reproductive technology and child development.

“We feel that these themes tie in well with both Winston’s scientific work, and that done by Gravida and LENScience, who are hosting the event,” says LENScience Teaching Fellow Chandar Dewan.

“It’s exciting to have him visit Auckland, and we hope science teachers will be able to join in the live broadcast.”

TALKFEST 2014 is in two parts: the first is the ‘junior’ talk, aimed at Year 7–10 students. ‘Puberty: Let’s talk about it with the experts’ offers a unique educational experience for this age group.

The group of children featured in Winston’s popular BBC series Child of Our Time, which tracks child development from birth, is currently around thirteen years of age.

“Our junior talk will tie in nicely with Winston’s series, which is currently focusing on puberty and adolescent development,” says Chandar.

“We’ll also be discussing early-onset puberty, and why this is a phenomenon we’re seeing more of now than we were 100 years ago.”

He says it also links in with research done at Gravida and LENScience in this area.

The senior talk, ‘Reproductive Technologies: An Issue for our time’ is about reproductive technology, in particular, the ethics of this science, and is especially for Year 12 and 13 students.

“Lord Robert Winston’s work is tied up with these issues – his team was responsible for the study into embryos and genetic diagnosis before the embryos were implanted,” says Chandar.

“So in this talk, we’re going to focus on the ethics around reproductive technology. Secondary students like to talk about ethics, and their teachers love this theme too because it links directly with The New Zealand Curriculum.”

For schools outside of Auckland, the online component of TALKFEST 2014 will be invaluable.

“We’re really interested in seeing the interactions between the scientists and the students,” says Chandar.

“Rather than sending scientists on a tour around the country, we want to use the technology to connect everyone up at the same time. It’s a much more time and cost-efficient way to bring engaging science to New Zealand students.”

Chandar says the timing of the event may require some timetable shuffling for schools that wish to join the live broadcast.

“Because it’s Robert Winston, we have had to adhere to a fixed time. We realise that not every school in the country will be teaching Year 13 biology at the same time, so it might mean that some science departments have to shift their classes around a bit on that afternoon.”

In addition to tuning in to the live broadcast of the event, schools can participate in the live chat.

“This is how they can directly communicate with other students and teachers from around the country, and the Pacific, and the scientists who are also going to be participating in that live chat too.

“We really wanted to get away from the idea of a one-directional format like a lecture, to involve greater participation and audience input.”

For more information about the panel discussion and live broadcast, visit the LENScience TALKFEST 2014 page.

Lord Robert Winston is an internationally renowned scientist and broadcaster, best known as the presenter of the BBC television series Child of Our Time and The Human Body.

Investigating child development in a highly engaging way, the programmes show how genes and environment interact to form individuals.

Lord Robert Winston came to prominence in the 1970s as a fertility expert. It was during this time that he pioneered new treatments to improve in vitro fertilisation (IVF) and pre-implantation diagnosis, allowing embryos to be screened for genetic diseases.

He is also a life peer in the UK’s House of Lords.