You are here: Science Education and the Environment » World agrees to ditch HFCs

Nearly 200 countries have agreed to phase out a specific agent of climate change by 2019 - one of the most destructive greenhouse gases, hydrofluorocarbons (HFCs). The agreement is being hailed as a concrete step toward meeting the targets of the Paris Accord. 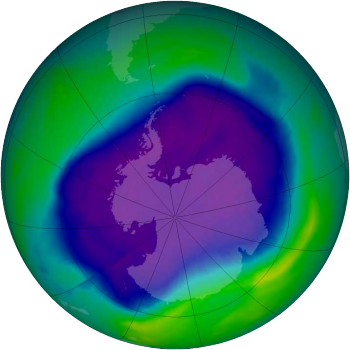 On Saturday in Kigali, Rwanda, 197 signatory countries agreed on a very specific climate change target, which US Secretary of State (one of the negotiators at the Kigali agreement) has called “... the single most important step we could take at this moment to limit the warming of our planet and limit the warming for generations to come… It is the biggest thing we can do in one giant swoop."

HFCs ironically only exist because they are slightly less harmful to our atmosphere than the substance they replaced: chlorofluorocarbons (CFCs). Those of a certain vintage will remember CFCs as the ozone-depleting bad guy of the  80s.

The new agreement is actually an update to 1987’s Montreal Protocol (more formally the Montreal Protocol on Substances that Deplete the Ozone Layer ), at which signatory countries agreed to stop producing CFCs. Other updates since have added other noxious no-no substances to the mix.

The Montreal Protocol is seen as perhaps the most successful effort at a multilateral approach to arresting climate change, and as a template for further agreements. And best of all, there’s hard evidence that it’s working: the ozone layer has slowly recovered since 1987, and is expected to return to 1980 levels of integrity between 2050 and 2070. Well done everybody.

HFCs are used in refrigeration and air conditioners, and while they represent a tiny fraction of the greenhouse gases we pump into the atmosphere, they’re a big worry, mostly because freezers and air conditioners are being snapped up like nobody’s business in the developing world.

Of those 197 countries, the developed among them will begin phasing out HFCs in 2019, and the developing nations have committed to capping their use in 2024, though of course, ‘developing’ includes such players as China and India.

In real terms, what that means is that HFC use globally should be reduced by up to 85 per cent by 2047 - that’s the equivalent of removing 70 billion tonnes of CO2 from the atmosphere by 2050.

Here’s some perspective: Those numbers are equivalent to “...stopping the entire world's fossil fuel CO2 emissions for more than two years," as scientist David Doniger told The Guardian.

The Kigali agreement doesn’t go as far as environmental organisations had asked for though: they had argued for an HFC reduction that would reduce worldwide temperature increase by 0.5 degrees Celsius. As it stands, the agreement should bring about a decrease of 0.44 degrees.

That sounds to us like an incredible step in the right direction, and we hope that the Montreal Protocol is seen by the world’s polluting countries as a template worth following. Maybe breaking climate change down into specific polluting substances, and phasing those out one by one is the way to go, rather than simply asking the world to stop burning stuff.

Another reason for hope is that this deal has big, nasty teeth: governments are obligated to meet its terms.