You are here: For women and girls in science

For women and girls in science

In a week in which NASA scientists have predicted a sea level rise of a metre over the next 100-200 years, a New Zealand scientist has won an award for her ground-breaking research into mapping climate change since the last ice age. Read more about her work, as well as a related ‘Girls in Science’ event held at the University of Auckland. 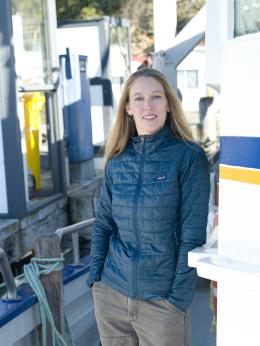 University of Otago geologist Dr Christina Reisselman was awarded the inaugural L'Oréal-UNESCO For Women In Science New Zealand fellowship this month, at a special event in Sydney on September 8.

As a climate researcher, she will use the $25,000 fellowship to give a more accurate picture of when we can expect sea levels to rise, and what that might mean for the infrastructure of our towns, cities and country.

Our past and future climates

Christina is a geologist at the University of Otago in Dunedin, and she addresses these questions in her work.

The daughter of scientists, Christina originally intended to be a writer, but eventually fell for geology, and after studying at the University of Nebraska-Lincoln, she went to the non-profit Joint Oceanographic Institutions in Washington DC, then Stanford, and the US Geological Survey. By 2013 she had moved to Otago, having been drawn south by a series of Antarctic expeditions.

Working on the Antarctic ice shelf and at sea, Christina collects sediment cores from hundreds of metres under the sea floor and reads the climate history of millennia past using the microscopic fossilised fish teeth and diatomic algae she finds in the cores.

Christina will use her L'Oréal-UNESCO For Women in Science fellowship to focus on the end of the last Ice Age around 10,000 years ago. By studying ice sediment cores, her research pieces together the climate record of past millennia, and could help us understand and plan for the impact of our planet’s rapidly changing climate.

“The fellowship evens out the workload somewhat enabling me to bring on board a research assistant to process thousands of samples taken from sediment cores around Antarctica,” she says.

“Science is incredibly creative, and it’s not about what we do know, but what we don’t know that makes it so fascinating."

“Science can change everything; it’s a career for the curious, for people who want to solve puzzles and know why.  It’s so fantastic that New Zealand now has access to this fellowship for women working in the sciences.”

To find out more about Dr Christina Riesselman’s work and to hear her speak about it, click here. 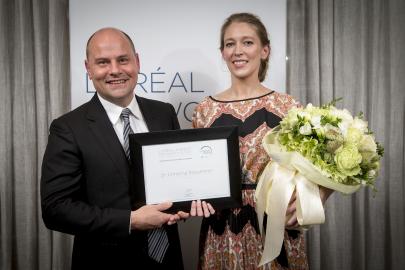 The L’Oréal Australia & New Zealand For Women in Science fellowship programme expanded in 2015 for the benefit of New Zealand women in science; comprising four $25,000 awards: three for Australian scientists and one dedicated to a Kiwi.

Funds from the fellowship can be used to help finance scientific research, including the costs of assistants, materials, travel, conferences and even childcare.

“We are delighted to support a programme that recognises and rewards women for scientific excellence and for their contribution to society,” says Martin Smith country manager for L’Oréal New Zealand. “Research and innovation is at the heart of our business, so we are immensely proud to be able to provide the opportunity for women to continue their research and move science forward in this country.

“Christina’s research is extremely interesting and highly relevant and it gives us great pleasure to present her with the inaugural fellowship.”

Giving girls the gift of science 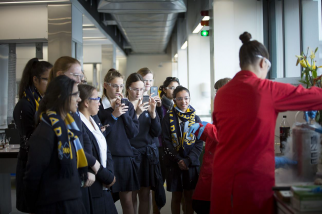 Left: At the Girls in Science event at The University of Auckland.

L’Oréal hosted the second ‘For Girls in Science Forum’ at the University of Auckland.

The Forum is part of the L’Oréal-UNESCO For Women in Science programme which has been acknowledging female researchers around the globe for 17 years with its laureate and fellowship initiative.

More than 150 year 11 and 12 female students from 15 schools around Auckland attended the L’Oréal For Girls in Science event to hear the career stories of renowned New Zealand women scientists. The students also had the opportunity to visit some of the university’s laboratories including the Photon Factory, Biophotonic Lab and Professor Brimble’s research lab.

This year’s panel was hosted by Dr Michelle Dickinson (aka Nano Girl) and chaired by Distinguished Professor Margaret Brimble, who was one of the five L’Oréal–UNESCO For Women in Science Laureates in 2007.

“Opportunities like this can change the lives of our girls as they hear about disciplines of science they may not have seen at school and they can potentially find their true passion,” says Dr Michelle Dickinson.

Also in attendance was the recipient of this year’s inaugural L’Oréal – UNESCO For Women in Science New Zealand Fellowship 2015, geologist Dr Christina Riesselman.

The disparity between the numbers of women entering and staying in science is clear. International research conducted by the Boston Consulting Group in 2013 shows that only 35 per cent of girls graduating from high school go in to science as a career, and only 18 per cent will graduate.

In New Zealand, we are only slightly better at 40 per cent graduating with a bachelor’s degree in science.

For women and girls in science
Categories