You are here: Schools are encouraged to follow genome sequencing 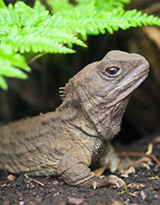 A new project by a group of scientists will allow the public to follow the sequencing of the tuatara genome.

Interested people can track the project’s progress by following a specialised blog at NZSciBlogs.

Neil Gemmell , AgResearch Chair and Director of the Centre for Reproduction and Genomics at Otago University, had the idea to blog the project.

He consulted with colleague and long-time science blogger David Winter about the possibility of documenting the sequencing process in this way.

“Neil's keen to blog it because the tuatara is an important creature for many New Zealanders, and the project is being done with the help of government funding.

Given that level of interest, we should let people know what we're doing.”

David is also excited about the project.

“Personally, I'm keen to use the medium to show how science happens.

Lots of people think of science as a body of knowledge, but really, it's a method that helps us understand the world, and hopefully documenting the whole process will help get that across”, he says.

The team of scientists are hoping that teachers and students will follow the project and use it as an example of real-life science practice, with an emphasis on biology.

“I think it's a chance for students to see some science that's going on right now.

“For most scientists, the most exciting thing about science is not the textbook stuff that we already know, but what we don't yet know.

“Hopefully we'll learn a lot from this project, and sharing that process will help students think about other questions the science they are learning now might help them answer in the future.”

Much of the sequencing work will be carried out by PhD students and postdoctoral researchers, many part of the Allan Wilson Centre for Molecular Ecology and Evolution.

“I guess it will depend on the level teachers are working. We hope we'll be able to show how researchers in New Zealand are applying the things students are learning about to real problems,” says David.

“The tuatara genome would be particularly interesting for evolutionary biology – helping us relate animals to each other and seeing how knowledge of the evolutionary history of life helps us understand biology.”

David says a range of scientists will contribute to the documenting process, which will highlight real-life science applications of such a project.

“We'll also get other genomics researchers to comment on the blog, which will show how this science is applied in medical, agricultural, developmental and ecological biology.”