You are here: Science Education and the Environment » To graze or not to graze? That is Tim’s question

To graze or not to graze? That is Tim’s question 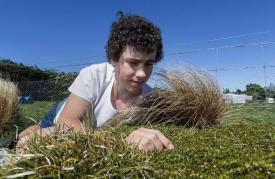 Tim Logan’s field work paid off this week when on Tuesday, December 2, he was awarded $50,000.

Tim was named winner of the Future Scientist Prize, one of five honours awarded as part of the Prime Minister’s Science Prizes at Te Papa Tongawera.

Tim, 17, combined his studies at Darfield High School with a two-year project investigating the protection and survival of New Zealand native plants; many of them endangered.

Focusing on his local Waimakariri Plains landscape, Tim examined the effects of stock grazing on indigenous grassland species, the first study of its type to be done in lowland Canterbury. With the aim of preserving the biodiversity in the region, this work comprised more than 200 hours in total and utilised a series of grids over different land types, including grazed and ungrazed sites. Tim identified and counted the plant species in each site and consulted widely with other scientists in the field.

A statistics modelling computer programme was used to graph the data, and he says he had incredible support from his teacher, Remco Baars, as well as Landcare Research ecologists Susan Walker and Colin Meurk.

“Colin helped me a lot with plant identification,” says Tim. “And Susan – who I still haven’t met, actually, put in so much time, helping me with the technical aspects of the modelling.

“I wanted to find whether stock grazing enhanced the survival of low-growing native plant species in the mid-Waimakariri floodplain, whether soil depth was a factor, and whether sustainable land use through low to moderate intensity stock grazing could achieve both economic and ecological goals without the need for compromise,” says Tim.

Tim’s parents agreed to fence off a part of their lifestyle block to create a native plant nursery and restoration project. The project boasts around 800 trees, all of them eco-sourced native species. “It did take a bit of convincing my parents to let me do the planting two years ago,” he admits.

Driven by a fascination for New Zealand’s unique biodiversity, and what it might have looked like 1,000 years ago, Tim wants to protect indigenous plants from extinction and believes this is possible with careful agricultural practices that balance ecology with economics.

The Canterbury region has one of the highest numbers of endangered native plants in the country.

From a thriving department

“His options are so open and he could choose to do anything he likes in science,” Remco says. “It’s all quite amazing, really. It gives us some real hope for the future to have bright young students like Tim.”

At the awards ceremony, it was noted that the winner of the Emerging Scientist Prize, Otago University lecturer and researcher Karl Iremonger, had also attended Darfield High School and had, in fact, been named Dux in his final year.

Tim says the prize came as a surprise. “I was really excited and overwhelmed when I found out I had won,” he says.

He is keen to dig in to further studies and will use the prize money to fund his tertiary education.

“I could be looking at doing quite a few years at University so will need it,” he laughs.

Read about the other winners here.

To graze or not to graze? That is Tim’s question
Categories