You are here: Science Education and Culture » Inspiring Pasifika: short films and a science teacher

A new project to inspire Pasifika students is achieving its aim: one click at a time. 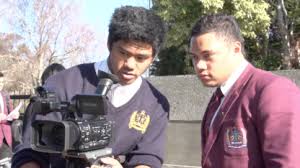 Looking into their own backyard for inspiration has come up trumps for Pasifika students from a group of North Island schools.

The Pacific Achievers Project, run by the Ministry of Pacific Island Affairs, has the primary focus of inspiring Pacific people from school communities.

With the aid of a production company (Attitude Pictures), the project sent 76 students from nineteen schools out into their school community, video cameras in hand. What they captured was a series of short video clips of people that inspired them, ranging from a hip-hop dancer to a young Black Fern to a hardworking science teacher.

To further encourage ‘clicks’ on the videos, the Ministry ran a competition: the clip with the most ‘views’ will go in to win video equipment for their school.

The videos are on YouTube and have received around 40,000 views in total. And that’s exactly what was hoped, says the Ministry’s director for regional partnerships, Reno Paotonu.

When embarking on the project, Reno met with a group of principals from the 25 schools in New Zealand with the greatest number of Pasifika students enrolled (24 of these schools are located in Auckland and one is in Wellington).

Low self-esteem was highlighted as the single biggest factor that limited student success in these schools. Reno says the Ministry of Pacific Island Affairs wanted to produce something to help inspire these students.

“At first we thought about producing a student magazine to feature Pacific achievers, but then we decided it would be better to have something in a more modern format, that reached across social media. So we collected together video clips of inspiring people.”

The students themselves developed the videos and chose the subjects. The only rule was that they were either a student or a past student from their own school, meaning the ages of the ‘stars’ range from 13 to 63 years. The stories that are portrayed are inspiring, funny, and sometimes moving.

“Some of the stories are quite touching, actually, the way people were honest about the barriers they’ve had in their journey to success,” says Reno.

And of course, the Ministry is pleased the videos have been widely viewed across the student population.

“We weren’t quite sure what the response would be, but we were very pleased with the results. We feel that students have really taken on board the responsibility of telling their own stories, of looking into their own communities for inspiration.”

Reno says the Ministry will consider running the project again in the future. “We’ve had quite a strong interest in the project from schools, so we’ll definitely explore it again for next year,” he says. 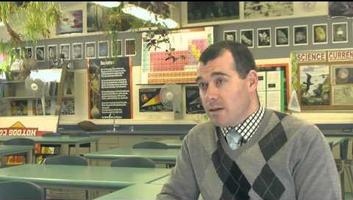 One of the video clips features HOF Science teacher at Auckland’s De La Salle College, Kane Raukura. In his video, he speaks about his upbringing and what he tries to achieve through his teaching work.

Kane has been teaching at De La Salle College since he finished his training, and is also an old boy of the school. He believes the key to success among Pasifika boys (and probably, he points out, all students) is motivation.

“When my students are motivated to do well, they achieve things. I try to inspire them. They have to see that they are able to succeed, and I do that by ensuring they can.” He says that taking the academic work required for an NCEA level and ‘unpacking’ it helps him introduce it to the students in manageable bites.

“I try to unpack whatever they need to do to pass, and break it down into small pieces that they can have success with each part. This, in turn, adds up to a big success in the long run. If they see success early, they are more likely to maintain their motivation all the way through.”

Senior science is not an easy subject, says Kane, and the students can get disheartened very quickly. “So I take a lot of time with the first assessment, to make sure everyone passes and understands it. Their spirits are lifted, and they see they have the ability to do it.

“Teaching is a huge challenge. To do it properly, it takes a lot of time. I give up a lot of my personal time. My wife is a teacher as well, so she understands where I’m coming from.”

Kane says he had a lot of whānau support when he was a student, which helped push him to do the best he could in all avenues of his young life, especially in education. “In the video, I quote my Dad a few times. He was a working man, and he would always say ‘If you’re going to do something, do it properly.’ And that’s something I’ve always kept in mind, as I’ve gone through my career so far.”

You can watch Kane’s video clip, as well as the other clips of Pacific Achievers here.