You are here: Matariki: renewal and remembrance

As we all head home for the long weekend, we look forward to a Monday off work, and the celebration of two big events: it’s the day we celebrate the Queen’s birthday, and it’s also Matariki, the beginning of the Māori new year. Sciencelearn.org.nz have plenty of great Matariki resources you and your class can access, to celebrate the occasion. 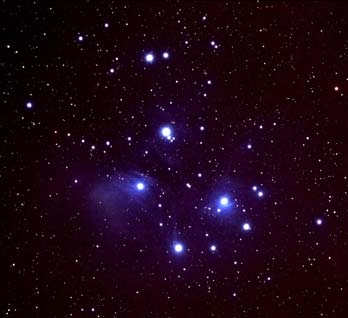 Matariki is also the Māori name for the constellation of stars known in English as the Pleiades, and also as the Seven Sisters, or ‘M45’ to the serious stargazer. The Matariki star cluster rises in mid-winter – late May or early June.

Matariki literally means the ‘eyes of god’ (mata ariki) or ‘little eyes’ (mata riki). According to myth, when Ranginui, the sky father, and Papatūānuku, the earth mother, were separated by their children, the god of the winds, Tāwhirimātea, became so angry that he tore out his eyes and threw them into the heavens.

Apart from heralding new beginnings and a new cycle of season, Matariki has traditionally been significant to Maori for another reason - at the same time that Maori look forward, they have always also looked back at this time of year, and remembered those who have passed away over the course of the year that has ended. So while there was sadness, there was also joy: harvest had been collected, and stores were ready for the long winter, so Matariki was - and is still - a time for celebration.

Matariki celebrations were once popular, but stopped in the 1940s. In 2000, they were revived. Only a few people took part at first, but in just a few years thousands were honouring the ‘New Zealand Thanksgiving’. A special feature of Matariki celebrations is the flying of kites – according to ancient custom they flutter close to the stars.

Sciencelearn.org.nz have plenty of resources and learning materials online, so you can involve your class in the Matariki celebrations.