You are here: A passion for pūtaiao

A passion for pūtaiao

Kamo High School students, whanau, teachers and board of trustees have joined forces to establish a science ‘academy’ for Ngatiwai year 9 students, and others interested. The aim is to share Ngātiwai Mātauranga (cultural heritage) with a focus on kaitiakitanga (guardianship). Kamo HOD science HAZEL MCINTOSH and Ngātiwai Pūtaiao project leader GAYLE WELLINGTON share their thoughts on the programme so far. 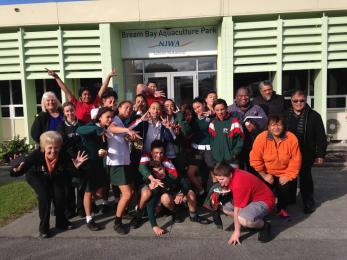 This year, the education team at Te iwi o Ngātiwai has joined the science faculty at Kamo High School with the purpose of opening the minds and passions of Ngātiwai descendants to view science (pūtaiao) as a foundation for career paths or possible future tertiary study.

For some time, it has been identified by universities, technical institutes and high schools, that Māori students are losing interest in taking science as a subject.

Science is a cornerstone of modern life — quite simply it's in everything and is everywhere. There are countless career paths that require an understanding of scientific principles as well as specific jobs in the many fields of science. Why then do we not see many Māori students in our universities studying science? Because science has struggled to engage taitamariki (young people) in their early years at high school, resulting in lower numbers choosing science to study in senior classes.

If we could entice our young Māori to take science by introducing them to its wonders through a Māori lens, then they might see studying it at school as more relevant to their interests and passions.

The year began with Ngātiwai introducing a mentor programme alongside a new science academy at year 9 level.

25 year 9 students have been encouraged to see science through te ao Māori, and we have attempted to contextualise the classroom topics in a way that young Māori can see how science can be of value and interest to them in their future.

The mentors are from Ngātiwai and come from different science backgrounds; nursing, sound and lighting, kaitiakitanga, electrical, catering, and teaching.

In the first half of 2015, science academy students went on six intensive field trips accompanied by their mentors and Ngātiwai kaumātua. They were introduced to marine ecosystems with Rod Ngawaka and Samara Nicholson; Matariki and the night sky with Moana-Aroha Henry and Peter at the Whangarei Observatory; Department of Conservation staff at the Mimiwhangata Coastal Park marine reserve and the pāteke recovery lake; the University of Auckland Marine Ecology Centre in Pakiri; and saw marine biology success with a team of Leigh Marine Reserve dive instructors.

These visits were all conducted from noho at ngā Marae o Ngunguru, Whananaki, Pakiri and Otangarei where they were also visited by scientist Ben Barr who talked about his passion for lizards, marine biologist and author Wade Doak and other passionate scientists from each area.

The students have become a pūtaiao whānau and have had day trips to Takahiwai NIWA and aquaculture centre, and Marsden Point oil refinery where they were taken behind the scenes into the control centre. The employees of these local workplaces were able to explain to the young students, how they had planned their study and schooling, to have a career in the fields they enjoyed.

Ngātiwai Education has committed to support the future science programme at Kamo High School by taking the junior curriculum plan for science and incorporating a te ao Māori perspective and there are plans underway to design resources that will support the Ngātiwai components. Alongside this, the mentors will discuss learning plans with students and support them to meet the goals they set for themselves.

A passion for pūtaiao
Categories