You are here: Swimming to the light

Swimming to the light

One day while at an aquarium with his daughter, Kit Parker of Harvard University was struck by a bolt from the blue: in his quest to 'grow' a bioengineered transplantable heart, why not start with an artificial stingray? 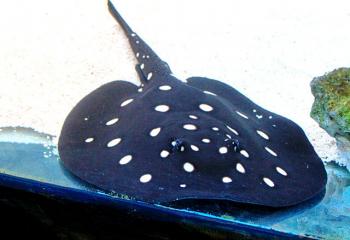 The human heart and a stingray may seem like wildly different instruments of nature, but surprisingly they do in fact have a couple of key things in common: they have both overcome similar problems, namely pushing fluid in an efficient manner; and their movement involves firing muscles in a precise sequence.

"I want to build an artificial heart, but you're not going to go from zero to a whole heart overnight," Parker told the NPR. "This is a training exercise."

The stingray is - morphologically speaking, a fairly simple creature. Parker and his team have successfully created and artificial stingray in the lab, using a gold skeleton, and silicone fins. The ray is propelled by 200,000 heart muscle cells taken from a rat. The cells have been genetically altered to allow the hybrid creature to follow a pair of blue lights.

Of course, we already have transplantable hearts. But these are basically mechanical pumps, and have many inherent limitations. One of these is that the mechanical heart doesn’t easily adapt to changes in blood flow and other circulatory system conditions.

As the video (also published by the NPR) below makes clear, Kit Parker’s stingray is controlled by pulses of light, and it’s surprisingly agile. They’ve even coaxed their creation through obstacle courses. It’s easy to see that, if a bioengineered heart based on the same technology were ‘built’ (‘grown’?), controlling it’s muscle fibres with light pulses would make it much easier to adapt to different circulatory conditions.

Parker knowns that some people may be crying ‘Frankenstein!’, but, he says, his stingray cannot be considered an organism: it doesn’t grow, and it doesn’t reproduce. He is aware though that his artificial ‘life’ form is definitely on a continuum that may someday get to that place, and he says that scientists need to remain mindful of the ethical issues involved.

Swimming to the light
Categories