You are here: Science Inquiry » Fast Forward in Qtown: finding the science within

Fast Forward in Qtown: finding the science within

Between 29 August and 2 September, Catalyst Trust, an organisation promoting innovation in the Wakatipu Basin region, is hosting a festival of science, technology and innovation called ‘inSight: a sneak peek into our future’. The festival will encompass free film screenings, talks, demonstrations, and other events. High schools and the primary schools in the region have been working behind the scenes for months on projects that will be the centrepiece of a showcase event called ‘Fast Forward.’

Fast Forward involves an examination of the potential future of Queenstown and its surrounding region. This investigation will culminate on Thursday 1 September, at Wakatipu High School, where students will be demonstrating the results of their hard work.

One of the organisers of Fast Forward is Jim Gilbert, head of the science learning area at Wakatipu High. One of the events he’s leading, building up to the Fast Forward showcase, is ‘science busking’: on Monday 25th August, five groups of students will be stationed around the waterfront of Lake Wakatipu, looking to engage the public in experiments and demonstrations designed to thrill, including some involving dry ice; pH change; smoke bombs; sublimation and state changes; and plenty of ‘illusion physics’. It’s all designed to engage with the public firstly, but Jim sees lots of learning value in turning the tables on his students, and asking them to do the engaging for once.

“It draws out their communication skills, and their confidence. They really need to know what they’re talking about, so that they perform the demonstration right! It puts them in the driving seat, which they really respond to. I guess the payoff is that sense of ownership, which flows back into school and into the classroom.”

Running with the theory that a great way to make sure knowledge sinks in is to ask students to teach it themselves, Jim will also be handing over the reins in the lab during the buildup to Fast Forward, and watching while some of his students teach primary kids from the region.

But ultimately, Jim is really relishing the chance to finally help put what amounts to a year’s worth of work on show to the public. 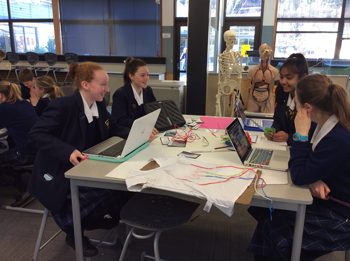 Year 9s and 10s at Wakatipu High have been working on projects throughout the year, focussed on thinking about what the future holds for Queenstown. Instead of restricting the project parameters, Jim let his students go down one of two paths in deciding on their topic of investigation: examining something that students might feel is an aspiration for the Queenstown region, or looking at a problem that they feel the area might need to deal with.

Jim is reluctant to single out any projects for special mention, on the basis that there is such a range of topics and methodologies, but one that sticks out for him is a group of girls who have been working on ‘wearable tech’. The group has investigated designing a t-shirt that could charge a cellphone using built-in solar panels. While they haven’t gone too far into the technical details as yet, what stands out for Jim as an educator has been the fact that the students started with something they were interested in - fashion and clothing - and found the science within.

“During their investigation, the girls looked into clothing manufacture and that sort of thing, and were surprised I think to discover how much science there is behind it. That’s one of the underlying themes that we went into this hoping to pursue.”

Jim would like to acknowledge the facilitation assistance of Catalyst Trust, and the funding support of Curious Minds in making Fast Forward possible.

Fast Forward in Qtown: finding the science within
Categories