You are here: Authentic Science Education » Using science to care for our caves

Using science to care for our caves 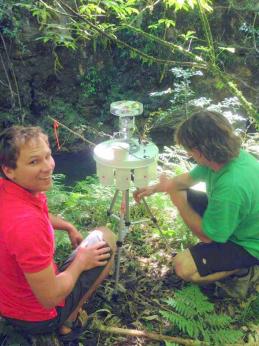 Science used in the preservation of Waitomo Caves

Kaitiakitanga means to live in balance with the plants, animals, soil, air, water, and each other to guarantee a sustainable and rich future for the following generations. This belief is strongly applied to ensure the wellbeing of the Waitomo caves.

A special Environmental Scientific Advisory Group protects the many thousands of little glowworms and delicate cave formations at the Waitomo Glowworm Caves.

Sophisticated automated monitoring systems check airflow, humidity, carbon dioxide, cave temperature, and outside air temperature. Data is downloaded to a central computer, monitored by specialist staff throughout the day and then reviewed monthly. Using this information, the advisory group determines the management of the cave environment, including deciding when air flows should be altered and the number of people who can visit each day.

This method has been implemented over the last 20 years to ensure the survival of the species of New Zealand Glowworm Arachnacampa Luminosa within the cave. Human intervention during 1975-1979 to control the ‘blow out’ of excess carbon dioxide gas, which caused the limestone decorations to corrode, was almost a disaster for the glowworm population. Removing the top cave door to allow air to flow through the cave and flush out CO2 also caused glowworm desiccation and stress, resulting in a mass die-off. Now, an environmental officer employed by the cave operator monitors the glowworm population and manages the corresponding data.

This data is recorded as a photograph every 30 minutes, where glowworm number and light intensity is captured. The glowworm is an important environmental bio- indicator, which in 1979 had reduced to only 4 per cent of its normal population size, causing the cave to close for several months. It also resulted in the formation of a scientific advisory group to protect the cave’s ecology.

Glowworm numbers are up at the present. Ongoing cave climate and glowworm monitoring, plus new aquatic insect (glowworm food) research allows the natural cave environment and glowworm population to be maintained. A recent Waitomo streamway study showed that an early recognition for the waterway soil protection scheme has had positive benefits for the aquatic invertebrates within the glowworm caves’ streams. The large population of glowworms needs a large food supply to sustain them and this environmental data analysis is an important future proofing measure to record ecological baselines.

Another science project that is gaining international recognition is the climate science of speleothems. Limestone is dissolved from rainwater mixing with a small amount of carbon dioxide in the air, forming a weak acid. The acid strengthens as more carbon dioxide is absorbed from the soil. Waitomo soil is rich in carbon dioxide given off by the roots of plants, animals in the soil, and rotting vegetation. As it seeps through cracks in the rock, the acidic water dissolves limestone. When the water enters through the cave roof, carbon dioxide is released into the cave air. The dissolved limestone is deposited in a calcite crystal form known as a speleothem. These decorations, especially stalagmites, record climate data and are giving New Zealand scientists a very accurate picture of what effects climate change has had on cave development within the recent and distant past.

All caves have a life cycle. The age of caves within Waitomo has been found to be no older than 400,000 years. This is young but also very mature in the natural landscape phenomena of karst. Karst areas are normally found in limestone rock. Examples of karst landscape features other than caves include sculpted rocky outcrops, sinkholes, and extensive underground drainages with springs and stream-sinks. This dissolved and sculptured limestone and weathered rock is evident in natural bridges, arches, tunnels, and deep gorges.

The physical analysis of limestone rock is special within Waitomo. The skeletal remains and shells that make up the 100m thick rock formations of Waitomo are from cold water corals. The quantities of organisms needed to make up the large limestone areas were previously thought to be only possible within tropical warm water environments. The resulting landforms have weathered fast and have similar characteristics to a tropical environment. One scientist recently proposed the forming of a geopark, giving Waitomo world heritage status because of the unique landforms of this area.

How schools can use Waitomo education for authentic science education

Cavers from Waitomo have recently discovered a cave connection within the Nettlebed cave system, making this New Zealand’s deepest cave at about 1200 metres. This is also one of the worlds’ deepest accessible from top to bottom caves. Cave divers are exploring underwater depths, searching for passages that are 221 metres below from available surface air and light. They have recently found three new species of fauna that have adapted to this extreme habitat. New discoveries of troglobites, or ‘cave trogs’, have been made. These critters have special adaptations to live in these dark deep places.

New Zealand has some estimated 160 species of harvestmen. Current research is looking at the evolution of animal weaponry in these arachnids. The species is called Megalopsis tumida. They have very long legs in comparison to their bodies, and they can readily lose limbs to escape danger. This adaptation is similar to the cave weta. Within caves, these are often observable and very engaging to learn about. One species of cave harvestmen predate on glowworms. One is also commonly found in your home, known as the ‘Daddy Long Legs.’

Glowworms continue to glow for visitors, who are amazed by this natural spectacle. There is still much to be understood about the life of a glowworm within a cave. Recently, schools have studied and been given access to some of this data as part of an achievement standard (a biological event on an ecosystem standard). The thirty minute glowworm cave climate recordings are producing some interesting trends for ongoing research within the science community. 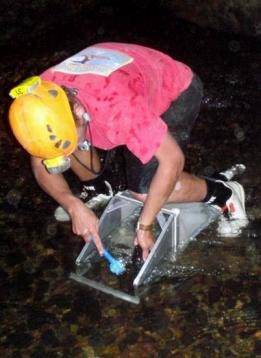 Waitomo is a place of gorges, a place where water disappears into holes in the ground. One significant area is the Ruakuri Cave and scenic bush reserve. There are interpretive signs to guide the active learner, based on themes such as the power of water, or crumbling caves. These limestone outcrops, caves and karst landscapes are easily-studied features. Junior and senior science students often investigate and explore the intriguing world beneath and around Waitomo caves. The rate of dissolving limestone can be observed both on and in our landscape. These effects driven by interacting systems are easily explained. Some classes even make models of these limestone karst features back in the classroom. One simple way is to use dissolved sugar cubes as a medium. Different layers in a cup can represent the forming sinkholes. There are concentrations of up to 55 sinkholes in every square kilometre of some Waitomo land. More investigation can involve the study of limestone purity. Limestone is an important ingredient for many technological applications within industry. I recently found out it is an additive to sugar making at Chelsea sugar refinery.

Carbon is stored within the calcium carbonate rocks, and this cycle is observable and learnt through discovering caves and crystals. Cave speleothems or formations – i.e. stalactites, stalagmites, and flowstones, or crystallised limestone rock, are easy to study within the classroom. Students can learn and have a lot of fun growing crystals in class or at home. These crystals have a finite life, just like the ones within a cave, which gleam with a caver’s light. A cave crystal can tell us an important story of climate over thousands of years. They can be grown in a matter of days, under the right conditions, but stand in caves as a marker and indicator for climate change. Understanding about all processes within a karst landscape has proven to be important for the sustainability of our landscapes.

Using science to care for our caves
Categories