The Prime Minister’s Science Prizes began in 2009 as a way of lifting the profile of science in New Zealand and those who excel in the field. Entries open for this year's iteration of the competition on 4 July. To get you inspired in the meantime, we asked 2015 Prime Minister’s Science Teacher Prize winner Tania Lineham for insight into what makes her classrooms tick. 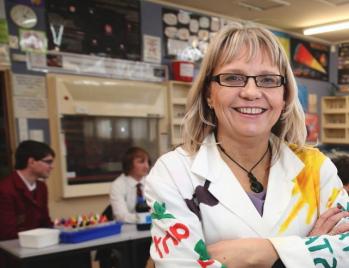 Tania Lineham has been teaching for 25 years at Invercargill’s James Hargest College, and it’s safe to say that everyone there – past and present pupils as well as teachers – agrees she’s made a big impact.

Trying to isolate the reasons why Tania has made such an impression is difficult. The best we can probably do is examine a few examples.

A world fraught with ‘science’

Information today is constantly clamouring for our attention. One of the crucial skills 21st century teachers concentrate on nurturing in their students is the ability to think critically; a skill that’s now much more of a challenge to modern students than the simple retention of facts. Science is no different in this respect, says Tania.

“There is so much material out there that looks real but isn’t, especially on the Internet. Part of my focus is on giving young people the tools they need to assess and analyse the wealth of scientific claims that are made to legitimise beliefs and products.

“It’s so easy to be ripped off—I don’t see how anyone can survive in the 21st century without some degree of scientific literacy.”

Tania’s ongoing legacy at James Hargest made her something of a shoo-in for the 2015 Prime Minister’s Science Teacher Prize. In fact, the college is already associated with the awards: former student Bailey Lovett won the Prime Minister’s Future Scientist Prize in 2010 for research into water quality in the Riverton/Aparima area west of Invercargill. This speaks to the outstanding track record of James Hargest students achieving excellence in local and national awards, under Tania’s stewardship.

Ask any scientist out there making their mark, and chances are they’ll be able to recall the moment, the lesson, or the teacher who became the catalyst for their passion. Tania feels strongly that this passion is kindled in the next generation of game-changers when there is inter-generational conversation: Tania and her staff maintain strong links with those who have already risen to the top, regularly inviting movers and shakers to speak to James Hargest students. Examples include astronauts from the European Space Agency, a cosmologist from Australia and local speakers such as engineers and chemists from the New Zealand Aluminium Smelter.

What do you think is the best approach in getting the best out of students of all abilities? How do you make sure you extend gifted kids while looking after the needs of those not so able?

Tania Lineham “It is important to differentiate your teaching and learning programme to cater for the needs of all students, and it is just as important to cater for those in the often forgotten middle of the class. I do not tend to give students different contexts or content to work on but like to operate on a ‘must do, should do, could do’ basis – the key is to engage students first and give them some choice (which can be limited) as to what they learn. That sounds a bit fluffy but it mustn’t be. Learning still needs to be academically rigorous. I often use the ‘5E’ learning cycle approach – Engagement, Exploration, Explanation, Elaboration, and Evaluation in my planning. I teach chemistry and science so there are many concepts and ideas that are not visible to the naked eye. In those situations it is important to help students “make visible the invisible” (from Cognitive Modelling [JTM1] by Roy Tasker) because that is the way most of us do most of our learning – visually.”

What’s the most important piece of teaching wisdom that you’ve run into in recent years, that’s made an impact in your practice?

TL “I’m not sure whether this is the most important piece of teaching wisdom I’ve received, but I believe there is something of a fallacy out there in the community: there are a lot of new tools coming out all the time – we have moved from data projectors to interactive whiteboards for example, and now students are bringing their own devices to class. I believe it’s important to remember that these are just tools. These tools will never replace an effective teacher in the classroom. Good pedagogy is the key to good teaching, not the tools you and your students are using.”

What’s your secret for engaging students? How much does a love of science ‘rub off’ in the classroom?

TL “It’s all about the passion. A teacher who is passionate about their teaching is going to ‘hook in’ more students than someone just going through the motions. The love of science does rub off. Many of my students would tell you that science or chemistry is their favourite subject and I am sure you will find the same of students taught by any teacher passionate about what they teach.”

What would be your advice to a nervous science teacher graduate about to start day 1 of new career?

TL “That’s a hard one because everyone is different. Apart from the obvious that they would have been given in their training, I think it is important for beginning teachers to give themselves permission to make mistakes.  Don’t feel like you have to know the answer to every question and be prepared to learn from the students as you expect them to learn from you. Students are very forgiving of these things as long as you make the effort to own and correct mistakes and you are honest with them – this builds positive relationships with students.

“I would also say keep the big picture in mind and don’t get bogged down in detail, be prepared for classes but also be prepared to change what you have planned as well. Lessons seldom progress exactly the way you think they will. Most importantly, be prepared to show the students how excited you are to be teaching them, share your passion and have fun with it.”