You are here: Science Education and Culture » Two sci-fi gadgets that are now real world

Science fiction futurists have an eerie habit of foreshadowing technology they imagine being part of an everyday future. Here are two examples that have emerged from the fevered minds of these visionaries and are now very much real-world: one an ominously cheap weapon that’s still in prototype form; the other an era-defining ubiquity of our own time.

Check out the video here

Enthusiasts of Quake, one of the archetypical first-person shooter videogame series (to those not clued in, an FPS is a game played as though the screen is your eyes; the protagonist’s goal is basically to bring about the grisly demise of hordes of baddies) will be very familiar with the rail gun – if they’re good enough to progress through the game to the point that this fearsome weapon is handed out.

It’s gone through many incarnations as the Quake universe evolved but has always looked nothing less than awesome when fired – one of the later models shoots a projectile that spouts fluorescent blue tracer.

Given that the Quake plot involves a marine travelling through space and time in pursuit of inter-dimensional monsters, many gamers might be surprised to learn that the rail gun doesn’t require 3-D modelling anymore. Ok, so the real thing is definitely not hand-held, requiring a fairly large battleship to carry it anywhere, and there’s no blue streak of awesomeness, but the U.S. Navy’s recently demonstrated prototype can fire a projectile at Mach 7 – seven times the speed of sound, or 8530 kilometres per hour. Even without an explosive war-head, that’s enough power to blow a hole straight through any ship or airplane you care to name, from up to 160 kilometres away. As you’ve seen in the video (see link above), the engine block of a retired army truck doesn’t even slow it down.

“Frankly, we think it might be the right time for them [the public] to know what we’ve been doing behind closed doors in a Star Wars fashion,” he said. “It’s now reality. It’s not science fiction. It’s real and you can look at it,” said chief of naval research Rear Admiral Matthew Klunder of the U.S. Navy, which has poured countless millions into the rail gun project since 2005.

Though all this Star Wars talk has the nerdverse a-quiver with anticipation, the somewhat disappointing reality is that the chaps with all the medals are excited about rail gun technology for a quite different reason: it’s cheap. Each projectile costs about NZD 32,000, which seems astronomical for what is essentially a large bullet (to paraphrase Chris Rock, maybe we should make all bullets cost that much?), but your average Tomahawk or Cruise missile can set you back close on NZD two million. As the American military tries to make its endless campaign to rid the world of nasty (oil producing) regimes more palatable to an increasingly war-jaded public, anything that’s cheap and doesn’t result in body-bags of the good guy variety is worth pursuing.

Budgetary constraints aside, given that a rail gun-armed ship won’t need to carry explosives, the navy hoi polloi won’t be that upset that their battleships are no longer floating bombs. They’ll have to make it through a few more years though: the first ship-mounted test firing of the prototype navy rail gun isn’t happening till 2016.

Rail gun technology might also find application outside the realm of death on a shoestring. The same concept could theoretically be used to propel a vehicle into space, though as the acceleration involved is way beyond the human survivability threshold, these would be unmanned. Again, the technology sells itself: it’s been calculated that using rail gun tech to fire capsules into space would cost as little as USD 528 per kilogram, compared with around USD 20,000 per kg using chemical rockets. 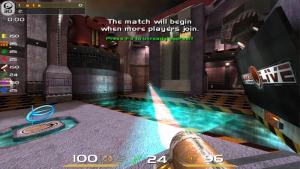 How does it work?

It’s all about electromagnetism. An electromagnet in its simplest form is just a bit of metal with a wire wrapped around it. Attach the wire to both ends of a battery, and the bit of metal becomes a magnet, until you turn it off. Being able to turn a chunk of steel into a magnet at the flip of a switch is quite handy; every time you hear sound coming out of a speaker, you’re hearing electromagnetism in action. Electromagnetism has also spared the knuckles of many an unannounced visitor: doorbells use the force to attract a bell clapper to a bell. Here’s a very simple experiment from Wired that nicely demonstrates electromagnetism in action. As the article rightly points out, if you don’t own a magnetic compass, get one. Your smartphone is useless after the zombie apocalypse.

Magnetic fields are also directional. This principle is demonstrated by the fact that two magnets will either repel each other, or attract, depending on their orientation. This video graphically illustrates what a magnetic field looks like. Electric motors rely on this principal; there’re loads of tutorial videos around that explain how to build your own electric motor with household bits and pieces: this is one of my favourite examples.

Like an electric motor, the rail gun works because the two rails (see diagram above) are electromagnets that apply directional force to the projectile, in a straight line rather than rotationally. Apply enough juice, and hey presto, you’ve got yourself a budget weapon of mass destruction. 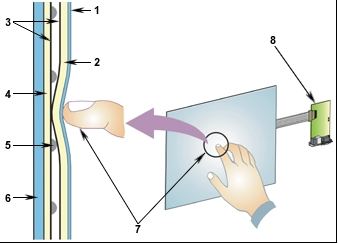 A woman was recently overheard telling her friend that her toddler ‘swipes’ everything. ‘Sure, nothing new here’ you’re thinking; most toddlers tend to make off with anything that will fit in their maw. It’s likely this is an instinct driven by the need to 101 a young immune system to our bacteria-saturated environment.

But of course, this particular mother didn’t mean ‘swipe’ in the Dickensian ‘to steal’ sense; she was referring to the latest meaning bestowed upon the word: “An act or instance of moving one's finger across a touchscreen to activate a function.”

Touchscreens have become ubiquitous in such a short time it’s hard to imagine how the world ever functioned in the dark times before the iPhone. Apple certainly didn’t invent the touchscreen - they’ve been around in prototype form since the mid-1970’s courtesy of a Mr. G. Samuel Hirst – but, as is their way, Apple took an existing technology and simply made it work to the satisfaction of millions of users.

In 1993 IBM produced the first touchscreen-enabled smartphone, the Simon Personal Communicator. To 21st century eyes, this brick looks like something Moses may have received the good word on (which is clearly why he had to ascend a mountain to get at the 10 commandments – finding a decent signal was likely a daily frustration in Old Testament Egypt). The world wasn’t ready however, and the Simon ceased production after only six months.

To what extent the modern touchscreen owes its genesis to Captain Jean Luc Picard and the gang aboard the Enterprise-D in the classic ‘90s reboot Star Trek: The Next Generation is debatable, but it certainly helped to popularise the concept. In fact, the bridge of the Enterprise-D was chock full of touchscreen tech, and once again, the very un-visionary motivation of a tight production budget was the big factor.

“We had a much lower budget than the feature films did," one of the people responsible for the look of the Enterprise, Michael Okuda, told Ars Technica.

"So, for example, I looked at the production process of making a control panel, and I said, 'How can I make this as inexpensive as possible?' Having made those decisions, 'now what can I do to make it as futuristic as possible?'"

And what could be simpler than a smooth, flat panel with no bells, whistles, knobs and gauges?

How does it work?

There are half a dozen models that form the basis of all touchscreen technology, but two in particular are by far the most common: resistive and capacitive touch systems.

This is the most basic – and earliest – form of touchscreen, still very much in use at most ATM machine you’ve ever used. The concept is incredibly simple: two layers, one conductive and one resistive, both of which have current flowing through them constantly, are separated by tiny rubber spacers. Until one of your greasy digits presses down on the outer layer, bringing it into contact with the lower. The software registers a change in current at the coordinates where you pressed, and executes whatever command is assigned to those coordinates. The diagram below explains nicely:

Capacitive touchscreens – most smartphones and tablets employ this variant – don’t rely on pressure, but instead interact with anything that holds an electric charge. Your skin is one of those things.

The business end of a capacitive touchscreen is a layer of miniscule wires, thinner than a human hair, which store electric charge – this is where the name comes from: a capacitor stores charge.

When your paw touches a capacitive touch screen, your conductive finger completes a circuit, releasing a tiny stored charge. This creates a voltage drop at the spot your finger touched. Software processes the location of the voltage drop, and executes whatever action is assigned to that bit of the screen.

The fact that capacitive touchscreens rely on the charge in your skin also explains why they don’t work with a pencil.

Still confused? Check out this video. The first part deals with a simpler type of capacitive screen that we haven’t covered, but it’s pretty self-explanatory.