You are here: Science Education and Culture » Alchemy and earthquakes: making the Rutherford documentary

DR JOHN CAMPBELL, co-producer of a documentary based on his own book Rutherford Scientist Supreme, describes how the film came to be and what was involved in its making. 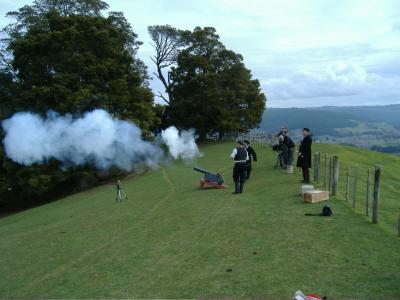 It is absolutely staggering that a full documentary had never been made of Ernest Rutherford, New Zealand’s most internationally-famous offspring, the first person to be awarded a Nobel Prize for research carried out in Canada, and one of Britain’s most illustrious scientists of all time.

In 1971, the centennial of Rutherford’s birth, the National Film Unit belatedly produced a 20-minute documentary for schools. This was a last-minute thought, forced on them at a time when the accurate story of Rutherford wasn’t known. Over the ensuing years, an occasional TV-type person would contemplate producing a documentary, but all came to nought – including one for which I loaned the draft copy of my book to a scriptwriter (maybe they went off the idea after I threatened to break every bone in the scriptwriter’s body if it was fictionalised “a la Hollywood”).

After my book was completed, I had in mind that it would be appropriate to have a documentary of three parts, done by the relevant national TV broadcaster. I hadn’t then realised that TVNZ was a disgrace of a national broadcaster, becoming merely yet another commercial broadcaster who should be sold off as such. The final straw came in 2005, when I visited the BBC, pointing out that 2008 (the centennial of Rutherford’s Nobel Prize) would be an appropriate year for a documentary.

The young producer, who had been delegated to take me to lunch whilst she explained the way of the world, was despondent. If it wasn’t a reality TV show or a costume drama, they couldn’t get the money. It was then I said “Damn* them. I’ll do it myself.”

$450,000 from Principal Patrons later and I had a documentary. It was one thing for me to work for free, but I couldn’t ask that of professional filmmakers, animators, actors etc.

The documentary was filmed in high-definition digital video, and comprises three one-hour episodes. I chose a young film director Gillian Ashurst (Snakeskin and Rocketman: The Life of William Pickering). She and I were co-producers. Translation: I raised the money and she spent it. Which was fair enough as she knew the costs in the industry.

An 8-minute trailer can be viewed here.

Many of Rutherford’s discoveries were animated for the film. Graduation songs, including one written by Rutherford, were re-enacted, as were many scenes relevant to his life and work. His relatives and people who had worked with him, or who could comment expertly on his work and times, were interviewed.

Gillian planned and pieced all into an outstanding documentary.

Part One: The Apprentice

Ernest Rutherford is followed through his boyhood adventures and misadventures, his education, his escapades as an undergraduate student, women getting the vote, and his research student work. In 1895, he leaves New Zealand with three degrees and two years research at the forefront of electrical technology, and he spends three years at Cambridge University during which he sets a world record for the distance over which electric waves were detected, helps JJ Thomson determine the nature of the electron, and he names the alpha and beta rays.

In Canada, he shows that radioactivity is the natural transmutation of atoms, discovers radon, dates the age of the Earth, and is rewarded with a Nobel Prize. From 1907 until 1919, he is at Manchester University where he develops the Rutherford-Geiger detector, discovers the nuclear nature of the atom, develops methods for detecting submerged submarines, a great peril of World War 1, and splits the atom, thus becoming the world's first successful alchemist.

From 1919 until his untimely death in 1937, Rutherford heads the Cavendish Laboratory. There he oversees the discovery of the neutron and the development of particle accelerators culminating in the first fully artificial splitting of the atom and the first fusion reaction. As Lord Rutherford of Nelson, he proves himself an elder statesman, lobbying for the rights of scientists displaced by the unstable political climate of the 1930s.

Each episode is broken up into chapter headings, each covering typically five minutes running time. This allows school teachers to quickly locate a segment they may wish to show in class.

Over the years, I had laid down videotaped interviews with those still alive who had worked with Rutherford. Just as well. All but one were dead by the time we started filming.

We had hoped to film overseas twice, in opposite seasons, but funding restricted us to one trip. Have no sympathy for Canada, where Rutherford’s whole time there appears to be under snow. I had aimed to have three Principal Patrons from each of the three countries but managed only one from Canada, after extending the invitation to over 20 Canadian organisations. Half the outdoor filming there took place in a blizzard that closed the airport and delayed our departure for England by a day.

New Zealand was more fun; blowing up tree stumps, exploding toy cannons, and having an artillery shoot with a Nelson military recreation group. But then earthquakes kept crying foul. We were to do the final New Zealand filming two weeks after the February earthquake. That day, the art director was to be evaluating a brick building in Lyttelton for the Manchester lab sequences. The building came down. For several days, we didn’t know if the art director was alive or dead (luckily the former, as his schedule had been delayed). I managed to convince the director that almost all the remaining shots could be in the convivial surroundings of Pomeroy’s Ale House and the retired knocking shop upstairs. It was part of a rambling brick brewery of the 1860s. As we wrapped up the penultimate sequence at 6pm one Saturday night, the damaging June aftershock struck. Afterwards, I commented that none of the SOBA members in the bar left the premises. “Ah”, said they, “We had to hold onto our pints to stop them spilling.”

I was awarded a 2012 Education and Communication Award from the Canadian Nuclear Society for the documentary. At the time, we could only afford an educational DVD. Recently, I had to pay thousands more to copyright holders in order for it to be offered commercially to TV and for general DVD sales.

One of the principal patrons, the College of Science at the University of Canterbury, donated a copy of the DVD to every secondary school in New Zealand. For personal copies, please email rutherforddvd@ask-a-scientist.net.

Reviews and purchase details can be found here.

(footnote * It was stronger than that but this is a family magazine.)