At SciCon 2016 famed environmentalist Kevin Hackwell inspired his keynote audience by challenging all New Zealanders to commit to a predator-free New Zealand by 2040 - as reported here on NZST - an idea that he demonstrated was perfectly feasible, given DOC's past form in pest eradication. Well, the Government must have been listening, although they've taken a more cautious approach: yesterday, John Key announced concrete strategies that will contribute to the stated goal of a predator free New Zealand by 2050. 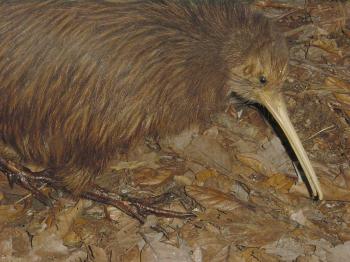 The basis of the plan involves forming a public-private joint venture company, that will begin executing (excuse the very dark pun!) strategies that include four interim goals, to be ticked off by 2025:

"This is the most ambitious conservation project attempted anywhere in the world, but we believe if we all work together as a country we can achieve it,” Key said, adding that invasive predators have surpassed poaching and deforestation as the biggest threat to New Zealand’s wildlife.

The idea that we could rid the entire country of introduced mammalian predators isn't a new one. It was in fact Sir Paul Callaghan who first proposed it, suggesting that to achieve such a thing would be New Zealand's equivalent of sending a man to the moon - a comparison he employed not to suggest that the idea was a 'moonshot' - nice in theory, but the about as likely as buying the winning Lotto ticket - but because New Zealand has a long history of leading the world in pest eradication, and is therefore entitled to dream big.

This position as world leaders in pest eradication was backed up in a Washington Post article yesterday, in which Holly Jones, an assistant professor of conservation biology at Northern Illinois University who studies mammal eradication on New Zealand’s islands, said the biggest island ever cleared of rats is South Georgia Island, a British territory in the Southern Atlantic. New Zealand’s North Island is 29 times larger, she said — and its South Island is 39 times larger.

“What they’re proposing would be incredible if they could pull it off, because their fauna is so vulnerable,” Jones said. “My first thought is that if anyone can do it, the Kiwis can. They’re the ones who have really pioneered the technology to eradicate mammals. But it’s going to be a big task.”

Dr James Russell, conservation biologist, University of Auckland, helped spell out exactly why Predator Free NZ 2050 is a feasible proposition, but cautions that it's a goal that every Kiwi will have to buy into.

“We’ve been part-way there for some time. Already nearly half our offshore islands are free of introduced mammalian predators, but these are only the smaller islands (10% of total area). It has taken us 50 years to arrive here, so 2050 seems a reasonable goal and matches our current scaling laws for eradication size. But just as the aerial distribution of rodenticide bait was the game-changing technology in the 1990s, we will need at least one if not more game-changers across the physical, natural and social sciences to achieve PFNZ by 2050.

“Great examples exist across the country, including the recent logistically, technically and ecologically challenging Million Dollar Mouse eradication of mice from Antipodes Island which was recently completed in record time, showing how we are becoming more efficient at completing these eradications. However, while few New Zealanders will ever visit Antipodes Island, meanwhile across the mainland New Zealanders everywhere can now visit mainland sanctuaries on the backdoor step of every major urban centre, and even contribute to their own sanctuaries in local reserves or their own backyard."