You are here: Meet Luca, your earliest relative

A team of scientists believe they may have identified the progenitor species from which you, me, and every other living organism on earth descends. 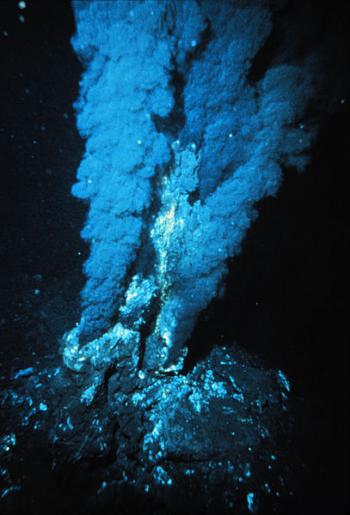 As reported by many outlets including The Independent today, researchers believe they have arrived at the Last Universal Common Ancestor - LUCA - by tracking genetic commonalities back through time, and have generated a portrait of an organism containing only 355 genes, which probably lived in the vicinity of four billion years ago, when the earth was a sprightly 560 million years old.

This kind of historical DNA detective work has allowed scientists in recent years to add exponentially to our understanding of the tree of life, but there has always little more than conjecture as to what sits at the very base, the grand old matriarch of all life on the planet. The signs are encouraging that this mystery has finally been at least partially illuminated.

To be clear: scientists haven't actually found the living species that sired all life, for the very good reason that evolution doesn't stand still, but they have used regressive DNA tracking to paint a hypothetical picture of what that form LUCA took. Bolstering the case for this imagining of LUCA, the researchers involved in this latest work say that their theoretical 'microbial Eve' aligns closely to organisms that can still be found in certain extreme environments, like undersea vents. This finding will no doubt add heat to the debate that's been raging lately as to the origins of life: warm and pleasant puddle of soup - the scenario favoured by Darwin - or hellworld of chemicals and scorching heat?

The findings, from a team led by William F. Martin of Heinrich Heine University in Düsseldorf, Germany, could have solved one of the most pressing head-scratchers in evolutionary biology. The sticking point has been the fact that the three major domains of life - bacteria, archaea (single-celled organisms that have no cell nucleus), and eukaryotes (all other beings whose cells have nuclei) - don't seem to have much in common, but logic of course dictates that they must share an evolutionary granddaddy.

In simple terms, our evolutionary family tree is built upon the identification of 'gene families', that species have in common. Reporting in the New York Times, Nicholas Wade gives the example of humans and mice: any genes appearing in both species that do the same job were generally developed by the first mammal. Using this technique, Dr. Martin and his team were able to identify 355 genes that were likely to have been present in LUCA. And because genetic structures are tailored to the environmental niche which an organism is exploiting, Dr. Martin hypothesised that LUCA's genetic portrait would help them understand what sort of conditions the ancestor of all life lived in. The results blew his highly evolved mind, said Dr. Martin in the same NYT article.

“I was flabbergasted at the result, I couldn’t believe it." The portrait pointed with startling accuracy to an organism that would have thrived in the extremophile conditions of today's deep sea vents.

The origin of life itself?

Dr. Martin has extrapolated his findings further. He has argued that LUCA is likely to be very close to the originator of life itself, a claim that's provoked lots of controversy. While other scientists believe that the organism described by the research is actually a comparatively advanced life form, and quite a distance away from the first life in evolutionary terms, Dr. Martin argues that because LUCA depended on hydrogen and metals, and lacked many genes that we regard as being essential to life, LUCA was in fact only "half alive", an evolutionary staging post between life nascent and life proper.

Check out the NYT article referred to above for a run-down of the arguments against LUCA being the oldest form of life.