You are here: Bits and buzz: science news

Ever wondered how your skin keeps all your blood and stuff on the inside? No? 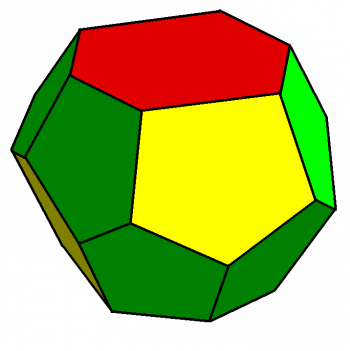 One normally doesn’t have to worry overly about one’s skin getting tired and suddenly spilling a whole lot of the fluids it keeps at bay. Unless you’re unlucky enough to have contracted one of the  very dire family of viral hemorrhagic fevers. In general though, despite the fact that we replace our entire outer layer of skin at least every month, our skin does a great job of keeping us in something like a form that the opposite sex apparently finds attractive.

Scientists have now discovered how skin does such a good job of keeping it together: our skin cells are arranged in such a way that gaps are never left, even when individual cells are lost - we get rid of about 200,000,000 every hour. This is because individual skin cells are shaped in the form of a tetradecahedron, a polyhedron with fourteen faces.

A team from Keio University in Japan, working with researchers from Imperial College London, has discovered that this tetradecahedron shape (your skin’s are flatter than the more spherical one in the diagram), in conjunction with their ability to temporarily ‘glue’ themselves together, may explain our otherwise implausibly watertight barrier.

Funnily enough, it was William Thomson, 1st Baron Kelvin, who first proposed that the tetradecahedron was the best shape for packing equal-sized objects together to fill space with minimal surface area, though he wasn’t inspired by looking at his hand - it’s just an interesting example of nature following mathematical efficiency.

By the way, yes, this Lord Kelvin is also the bloke who contributed to the formulation of the first and second laws of thermodynamics, and gives his name to the scale used for absolute temperatures: he was the first to pin down the value of absolute zero - the coldest temperature possible, which is -273.16°C, or 0 Kelvin.

Everything we’ve made weighs quite a lot. Roughly 30 trillion tonnes in fact.

An international team led by University of Leicester geologists has the weight of earth’s ‘technosphere’: defined by the authors of the study, published in the journal Anthropocene Review as “[the] summed material output of the contemporary human enterprise.” That’s everything from toasters to Toblerones, from pencils to Portaloos, and includes the the giant piles of waste material that we humans prefer to stash where we don’t have to look at it. All up, that’s the equivalent of dumping 50 kilos of human-made stuff onto every single square metre of our planet.

As we’ve begun to view the impact wrought by humanity differently - in that we’ve started to look at ourselves as having brought about a new geological age, called the Anthropocene - we’ve also started thinking about how the age of man will look to the scientists of millennia hence, as one of the geologists who contributed to the Anthropocene Journal article explains.

"There is more to the technosphere than just its mass," says Professor Colin Waters. "It has enabled the production of an enormous array of material objects, from simple tools and coins, to ballpoint pens, books and CDs, to the most sophisticated computers and smartphones. Many of these, if entombed in strata, can be preserved into the distant geological future as 'technofossils' that will help characterize and date the Anthropocene."

The number of individual types of technofossil - stuff we made that’s buried - may have reached one billion, easily surpassing the number of biotic species now living.

Being man made, the technosphere can be said to have evolved from the biosphere. Slight problem when comparing the two however: if you’ve been to a dump recently, you’ll notice that technosphere objects aren’t real good at recycling themselves - and the authors of the report believe that this factor could be its eventual downfall.

Parkinson’s Disease may start in the gut

Naturally enough, when looking for clues toward beating the ravages of Parkinson’s Disease, scientists have started with the brain, where the illness does all the damage. A new study shows that the genesis of the disease could have been hiding in the digestive system this whole time.

Parkinson’s is a progressive neurodegenerative condition, meaning it slowly cripples the brain and every function it has dominion over - all of them in other words. It’s caused by anomalies in the production of the neurotransmitter chemical dopamine, which is responsible for a huge range of stuff going on in your head including:

Though there are treatments to slow and control the onset of Parkinson’s, there’s not yet any way to stop it entirely, and scientists are pretty much baffled as to what causes it.

We keep hearing about how important gut microbes are to our general wellbeing, and now researchers from the California Institute of Technology have come up with the intriguing possibility that they could be responsible for Parkinson’s, and other neurodegenerative conditions, as reported in the journal Cell.

The scientists performed experiments where gut microbes were moved from a mouse with a Parkinson’s-like condition, to a healthy specimen. These unfortunate mice developed some of the motor symptoms we associate with Parkinson’s. The scientists then treated mouse Parkinson’s patients with antibiotics, and recorded a lessening of the same symptoms.

One possible upshot of the study is that probiotic or prebiotic treatments could help to alleviate Parkinson’s. But there are currently a number of obstacles we can’t yet get over, one being the fact that long-term, super strong courses of antibiotics cause all sorts of mayhem in human patients, which is why medical professionals don’t do it, unless they’ve got no other option: for a start, such overuse can seriously compromise the human immune system.

And of course, the journey of any potential drug from mouse to man is one that usually takes many years. But hey, we could finally be looking in the right place.