The UK’s Morecombe Bay Primary School recently made headlines around the world when they sent Sam the (toy) Space Dog into near-earth orbit. 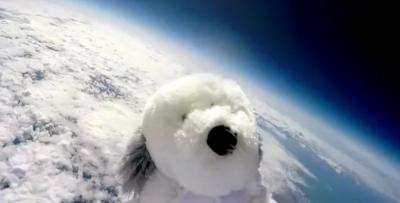 The school sent Sam, a stuffed toy dog, into space, with help from a local hotel, and a company that supplied a helium balloon.

Sam was equipped with a GoPro camera, which, as it was pointing downward during the flight, made Sam look as though he was taking a space selfie. He reached an altitude of 24.9 kilometres, before descending to earth.

The school used the opportunity to create an engaging learning programme around Sam’s big trip into space.

Leading up to the launch, classes at the school got involved with activities like making asteroids  out of brown sauce (similar to tomato sauce), ammonia, and dry ice; they exploded various fuels in bottles and learned about nitrogen balloons.

The learning programme inspired by Sam was a whole-school exercise, says Siobhan Collingwood, head teacher at Morecombe Bay Primary. The school includes the age-group that we in New Zealand would call ‘early learning’ – so all students aged, from three years to 11 years, were able to get involved.

Siobhan says that the actual launch of Sam into space provided a great climax to a build-up of learning.

“Everybody got dressed up in fancy dress on the day [of the launch] and we paraded across the town with Sam and launched him from the top of the hotel.

“The students were just so amazed and excited to see the curvature of the Earth, and see how beautiful the Earth is from space – it was all a very awe-inspiring experience for the children.”

Siobhan says too that the experience had great authenticity for the students, who were able to touch and see Sam in the classroom one day, and were then shown footage of the toy dog in space. It made the whole thing very real to the children, she says.

The next day, unfortunately, Siobhan had the sad duty of telling the children that while the balloon and camera had touched down after ascending to near-space, Sam was missing in action.

New Zealand Science Teacher has assured Siobhan that Kiwi teachers will keep their eyes open, in case Sam caught a ride on the jet stream all the way down here.