You are here: The Material World » Fuelled by fungi

Batteries that don’t poison the planet at the end of their useful lives may soon become a reality. 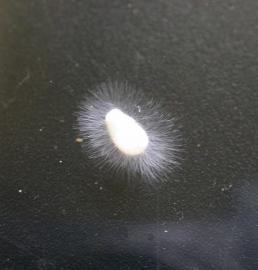 In a new study, Professor Geoffrey Gadd of Scotland’s University of Dundee and his colleagues experimented with the ability of a red bread mould to transform metals and minerals in useful and surprising ways, including more sustainable electrochemical materials for use in rechargeable batteries.

The researchers incubated the mould, called Neurospora crassa, in media amended with urea and manganese chloride (MnCl2) and watched what happened.

They found that the long branching fungal filaments (or hyphae) became biomineralised and/or enveloped by minerals in various formations.

After heat treatment, they were left with a mixture of carbonised biomass and manganese oxides.

Further study of those structures showed that they have ideal electrochemical properties suitable for use in supercapacitors or lithium-ion batteries.

N. crassa is also being used to help scientists understand how species arise and evolve, and how cells and tissues change their shapes in different environments.

Fungi, of which mould is a subset, are living organisms that are distantly related to plants, are more closely related to animals, but really are rather different from either of those groups.

How are fungi recognised?

Growing mould in the classroom

Visit How Does Mold Grow? for a hands-on demonstration for primary-aged students of the conditions that mould needs to grow.