You are here: The Living World » A new way of looking at the dihybrid Punnett square

A new way of looking at the dihybrid Punnett square

In the example below I have used Mendel’s cross between round, yellow seeded (RRYY) and wrinkled, green seeded varieties (rryy). The dihybrid has the genotype RrYy and makes four kinds of gamete, RY, Ry, rY and ry.

The 16 different ways four kinds of gamete can combine at fertilisation are usually shown in the checkerboard diagram named after the geneticist R. C. Punnett.

The four different kinds of gamete are conventionally written in the order RY, Ry, rY, ry.

The conventional order in which the gametes are written is one of 24 possible sequences, so what’s so special about this one?

The answer is probably nothing, but the convention seems to have been set in stone ever since Punnett published his work early in the 20th century. 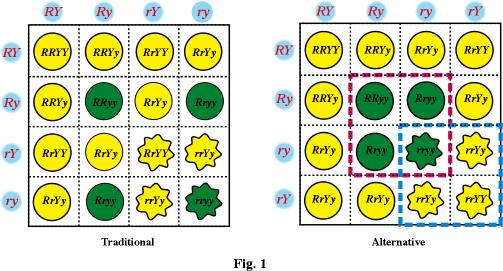 The alternative Punnett is more useful than the conventional one, for several reasons: 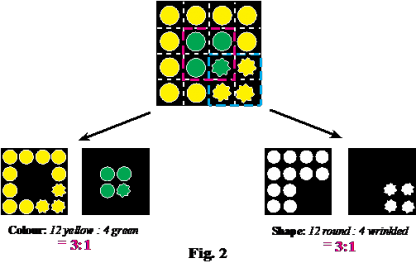 The acid test is, or should be, the students. Just ask a class of Level 2 students who have not yet been taught dihybrid genetics, and show them the above two Punnett squares, and ask them to vote on which shows a clearer pattern.

It would be an interesting and, I suspect, revealing experiment.

A new way of looking at the dihybrid Punnett square
Categories