You are here: The Nature of Science » Book review: Discussions in science 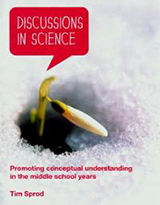 This book is written for middle school teachers and fills an important niche in the market. In the first section it provides a very succinct overview of the challenges of providing relevant and engaging science education in the 21st century. Tim Sprod argues that developing ‘communities of inquiry’ in classrooms is a powerful method for increasing student engagement, thinking and motivation in science. He gives just enough theoretical background for thinking teachers to be able to use their professional judgment and experience to adapt and modify the suggested activities that are outlined in the second (and main) part of the book.

This book could be a very useful resource for New Zealand teachers as they try and work out what science programmes that reflect the intent of the New Zealand Curriculum document might look like in their classrooms. It is much more than the usual ‘recipe’ approach that is commonly seen in books aimed at teachers. This book provides a bridge between theory and practice; this is where I think the book excels.

The second section of the book consists of a number of ‘stories’ that are designed to be read aloud by the students to stimulate discussion. The stories are accompanied by discussion guides that aim to help teachers structure these discussions in useful ways. There are also brief outlines of the science involved and also ideas about the nature of science, and suggested activities.

I found the teacher support material useful, but the stories themselves – although providing concrete examples – seemed somewhat contrived and did not engage my interest. I could not imagine myself in the story, and found it difficult to engage with the characters. In the notes accompanying one of the stories, Tim Sprod writes that he got his inspiration for the story from Fredric Brown’s, The Weapon (2001). Sprod tells the reader this story is available online and might be a better one to read to the class. When I looked up The Weapon I had to agree that this story did indeed have the power to engage the reader in a way that the stories in Sprod’s book don’t. For me, this highlighted the difficulty in writing stories for a particular purpose (for example, promoting discussions about the Nature of Science) without losing the story’s power to engage at an emotional level.

Despite this criticism, the stories do illustrate ideas for teachers and provide a useful starting point. I will certainly draw on ideas from his book when working with teachers.