You are here: The Living World » Sea monsters at Ridgway!

In October, Year 7 and 8 students at Wellington’s Ridgway School got stuck into some dissection of several arrowhead squid (nototodarus sloanii). Afterwards, students were asked to write about the experience. Assistant principal Diana-Grace Morris was so impressed, she shared some of the resulting essays with NZ Science Teacher. We’re very impressed too! What’s immediately clear from the writing is how valuable the dissection exercise was: some students effortlessly employ anatomical terminology, while expressing their thoughts in some really creative ways, and using the experience to construct an imaginative narrative. Thanks Ridgway School! Two of the student essays are reprinted below, courtesy of Diana-Grace and the Ridgway students. Enjoy! 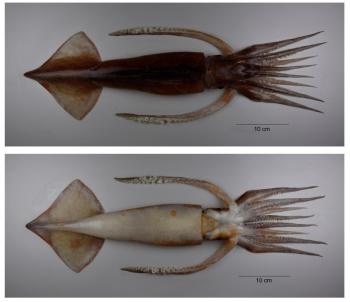 Here’s how to hack open a sea monster, kids!

On 13th of October, the year 7 and 8s came to school excited to do some dissecting of some arrowhead squids (also known as nototodarus sloanii). When it’s finally time to do the dissecting we put some too-big gloves on (which is actually pretty weird on its own!) and get into groups - I was in a group with Georgia, Ione and Kajol. Then each group went to a table, each with a cold and squishy squid in a tray on it! With our gloves, we each had a turn at picking the squid up and feeling it, but we could only hold it for so long because it was so cold! (the squids had come frozen from Moore Wilson's earlier that day, taken to Ridgway School via Ms Morris’s car) The squid felt really slippery and smooth and it smelt really fishy. And then we got into the fun stuff!

First of all, we took the beak out. This was a really strange process, as there was a lot of rubbery stuff around the bit of the beak that was showing. With the gloves on, using our fingers we held the squid so that its mantle was pointing towards the tray and then parted the squid’s arms and tentacles so we had room to remove the beak. The beak was quite hard to take out. We had to push our fingers into the rubbery stuff and wiggle them around until we found the base of the beak, then lever it out. The squid’s beak was actually a lot like a bird’s beak in shape. It was hard and shiny and it was very small. It was black where it poked out of the rubbery stuff but deeper in it was a faded brown and at the base it was completely see-through.

After removing the beak we moved on to cutting up the mantle. The mantle was cold and stiff and a really weird consistency. It might of been so stiff because the scissors we were using were quite blunt. The mantle was already separated from the head so we could just slip the bottom blade of the scissors underneath the mantle and snip. The mantle was really long and it was quite skinny at the tip, but we did it. Then everyone was eager to see inside.

Cutting the mantle was really fun and so was taking out the beak but now was the part that we were all really looking forward to: seeing what is inside an arrowhead squid. We unfolded the two halves of the mantle and spread them apart. Inside, just above the head, there was a big, shiny stomach. We tried stroking it gently and it felt sickly, full and ready to burst. Then our next instruction was to take out the pen. Before we had started dissecting, we had learned about exoskeletons and endoskeletons, which the squids have. So that basically means that squids have their skeleton (or their pen) on the inside and their organs on the outside and then, of course, their flesh outside of that. Anyway, the pen was hard to get at because it was hidden around the back of the stomach. But we finally got hold of it and pulled it out the tip of the mantle. It felt so gross pulling it out! It felt like it was just lodged in, and didn’t want to come out, but it finally came out. It was well worth it. The pen, once we got it out, looked exactly like a fountain pen! It was quite clear and transparent and slightly coated in gooey stuff! When we picked it up it felt very light and spindly and delicate as though it could snap quite easily. But you can definitely tell why it’s called a pen!

After looking at the pen, we tried to find the ink-sack, but our attempt miserably failed. Instead of popping the ink sack, we accidentally popped the stomach and all the digestive glands came out! For some groups, the digestive glands poured all over their squids and got all on their gloves! We spent quite a bit of that lesson popping different parts of the stomach to see if any of the stuff inside them would be a black liquid, but none of them were. But as Sir William Ramsay said ‘Progress is made by trial and failure; the failures are generally a hundred times more numerous than the successes; yet they are usually left unchronicled.’ So, even though none of the parts we poked were the ink-sack, we still kept trying.

When there was only one tiny sliver of smooth silver stuff left, we were beginning to give up hope. We were praying that the last sliver would be the one that held the ink… and it was! We got the pen that we had removed earlier and dipped it into the ink and wrote down the word ‘respect’. We were going to write down the other three Rs (responsibility, resourcefulness and resilience) but we had spent too much time on doing everything else that we just didn’t have time.

At that point we had to stop. We took off our gloves (which was quite hard actually, since we didn’t want to touch our hands with the gloves on) and put them in the bin. Then we all went into the bathroom to wash the stink out of our hands.

After all the dissecting going on in the classroom it was pretty stinky in there so luckily it was time for morning tea. Although some people may have lost their appetite from that experience! Altogether though, I thought it was a good way to spend your usual morning at school. I think some of the people that didn’t really want to do it actually really enjoyed it. I mean, it’s not every day you get to cut open a squid, is it?

Invaders from the ocean, aliens are real!

Blurb: When scary things from the ocean with no spine come to Rm 8, things get real, this is serious. Can Paul and his entourage save the world from these monsters or will they reign over all?

Ms Morris told us they were first seen on the news in Moore Wilsons, they hid in Ms Morris’ car and now they’re here. Ms Morris said that we had to dissect them. Apparently they’re invertebrates, which means that they have no spine, they also have an endoskeleton, which means that their skeleton is in the inside.

The alien monster was sticky, slimy and gooey like gloop and it smelled horrid like a dead decomposed person and the sewers manure. People were scared, others felt queasy, they were unlike any other creature on Earth! Scientists call them nototodarus sloanii.

The hooks and the creepy eye:

The monsters tentacles look like Medusa's snakes. On the alien’s tentacles were hooks that felt like Catwoman's claws grappling onto me and it's eyes kept bulging out, as if it was trying to use mind control on me. I felt like we had abducted the leader of the operations, he/she was probably trying to teleport me to it's home base where I would be tortured and served on the dinner table with a giant skewer in me!

Taking out the fragile beak, like defusing a bomb:

One wrong move and I could be trapped like in a snare and lose my finger. The beak is like glass and can break so easily. I feel like a thief having to remove all evidence from the crime scene, while still trying to stay undetected while I steal the diamond from it's well protected safe. I ever so gently place the gloves into it's mouth and take out it's beak, it's like taking an arrow out of a tree, I have to make sure I don't break it… I succeed and continue onto my next mission in triumph!

Taking out the pen:

I wish we had clamps, I wish we had tweezers, all we have is ourselves and gloves. We snip the monster that reminds me of the myths of Leviathan, Scylla and the Kraken, that old folklore may just be true. It's like taking a bullet out of someone's lungs, trying not to hit their heart in the process, or they’ll die, their life is in my hands, however in this case it's making sure not to hit the sac! When we take out the pen it's like pulling out a blade out of someone you’ve killed, ripping the spine out of someone, it feels sickly and I struggle holding back my own vomit! The objective is complete and this is just the beginning!

Now it's time for handwriting, wait what, yup you heard it right, we’re now poking it's own pen inside it's stomach, shall we hit the ink or will we hit the excrement? We poke the pen inside a spot in its belly with hope it's the right area, it's brown… is that right? I look over to see another monster with all of it's poops spilling out like intestines, like spaghetti bolognaise. We once again poke it and successfully hit the right spot, I start writing, the pen is bending, and we have half of the four R’s, Respect, Resourceful, Resilience and Responsible in brown, the other black, it looks unusual but it's done!

So Paul, his alliance Rm 8 and his guild/entourage Fairy Tail have indeed saved Fiore, Magnolia and all of Earth from harm's way but there are still future villains to annihilate and problems to solve. In the words of of Victor Scheffer 1906 - 2011:

“Although nature needs thousands or millions of years to create a new species,man only needs a few dozen years to destroy one.”