You are here: The Living World » A New Zealand evolutionary story: the wrens

This article, by E.J. and J.A. Grant-Mackie was first published in New Zealand Science Teacher in 1994 and presents the evolutionary history of wrens as a relevant and fascinating context for teaching secondary school science. 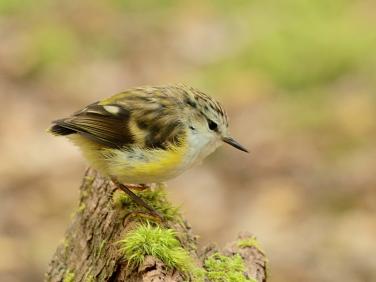 Note: We are reprinting this piece in response to a request from a school and with permission from Dr Jack Grant-Mackie.

When we think of examples of evolution, we generally tend to bring to mind the development of the horse (from the four-toed Hyracotherium to the modern single-toed Equus) or the classic story of the Galapagos finches. However, here in New Zealand we have our own version of that story; a story that has taken place over a longer period of time, allowing for a greater development of the characters.

Regrettably, it is a story that does not end with ‘and they all lived happily ever after’. The purpose of this article is to make senior biology teachers (and anyone else who may be interested) aware of a New Zealand group of birds that can be used as examples when studying evolution.

The New Zealand wrens, Acanthisittidae, are a group that has been isolated for so long from its unknown primitive passerine (the ‘singing’ birds, which make up over half of all living bird species) ancestral stock as to have become an endemic infraorder. This family, including the rifleman, the rock wren (seen on postage stamps), and the bush wren (as well as several extinct species), consists of small, poor-flying and flightless insect-eating birds that have been distributed up and down the length of New Zealand, but are now much more restricted.

How do we know a) that this is a group with one distinct ancestry, and b) that they were distributed throughout New Zealand? We know that New Zealand has been physically isolated from Australia for some 60 million years, and the wren ancestor has been here probably for at least that length of time. This is long enough for the family to have become endemic. (Although there are many exceptions, there is a general pattern among birds that new orders emerge with 60-80 million years of separation, new genera after 10-20 million years, new species after 2-10 million years, and new sub-species after 0.5-2 million years of separation.) In addition, both studies of the comparative anatomy of leg muscles and recent DNA hybridisation studies suggest that these birds are an ancient, isolated group with a common ancestry. 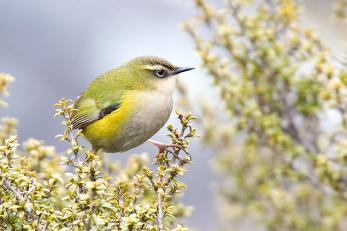 The second question is answered by looking at the fossil record of these birds, which shows that some species were widely distributed throughout New Zealand. In fact, in one fossil deposit in Nelson, six species of wren are found together. Our knowledge of past geological events (such as ice ages causing sea levels to drop substantially) allows us to see how such distributions of these basically terrestrial birds could have come about.distributed throughout New Zealand? We know that New Zealand has been physically isolated from Australia for some 60 million years, and the wren ancestor has been here probably for at least that length of time. This is long enough for the family to have become endemic. (Although there are many exceptions, there is a general pattern among birds that new orders emerge with 60-80 million years of separation, new genera after 10-20 million years, new species after 2-10 million years, and new sub-species after 0.5-2 million years of separation.) In addition, both studies of the comparative anatomy of leg muscles and recent DNA hybridisation studies suggest that these birds are an ancient, isolated group with a common ancestry.

Given the fact that all known descendants are thought to be insectivorous, it is likely that the ancestral wren was also. There may well have been several related species, of which the ancestral wren was one, living in various habitats up and down the country. Then, by 20-25 million years ago, rising sea levels had caused a major reduction in land mass (to 18 per cent of today’s size: Figure 2). 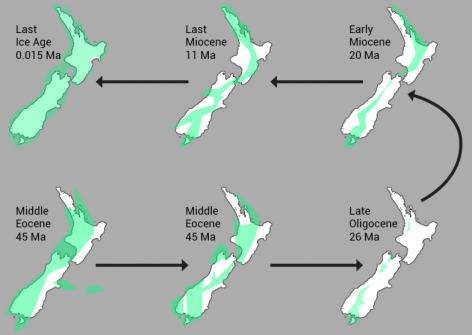 Figure 2: Paleographic maps of changes in shorelines in the New Zealand region over the last 45 million years, showing extensive loss of land area and niches up to the 'Oligocene bottleneck' 35-25 million years ago, followed by area expansion and niche diversification. Ma = millions of years before present. (after Couper et al., in prep.)

The effect of this would have been to reduce greatly the range of habitats, causing selective extinctions. The subsequent receding sea levels and increased land area encouraged the survivors to move into the new areas and niches that had become available. The adaptive radiation that resulted from this can be seen in both the living and fossil wrens. The family as we know it dates from this time of adaptive radiation and increased diversity some 20 million years ago, but earlier, so far unidentified members must also have existed here.

All insectivorous, living and extinct wrens have or had different feeding methods, habitats and lifestyles. Both the rifleman and the bush wren feed in the bush; however, the rifleman feeds on the trunks and branches of trees, while the recently extinct bush wren fed on the ground and in the air. The rock wren feeds among tussock and rocks and is apparently able to survive the winter among the rocks and scrubby vegetation under the snow layer.

Of the extinct wrens, undoubtedly the best known is the Stephens Island wren, a bird that has the dubious distinction of having been simultaneously discovered and passed into extinction. The species (named Traversia lyalli after the scientist Travers, who described it, and Lyall, the lighthouse keeper) is known from 12 specimens that were caught by the lighthouse keeper’s cat in 1894. Based on observations made by the lighthouse keeper, it seems that Traversia was the ecological equivalent of a shrew, flightless and scurrying in and around the grass and underbrush. Interestingly enough, Traversia has been found as fossils on both the North and South Island. Since Traversia was flightless, this shows that there were land connections between the North and South Islands.A recently discovered South Island species named Dendroscansor decurvirostris (meaning tree climber with down-curved beak: see Figure 3) had short, relatively thin legs, a curved beak, and reduced wings and sternum. These features have led scientists to believe that it probably did not fly, but spent its time scurrying up and down tree trunks, probing into bark and crevices for grubs. 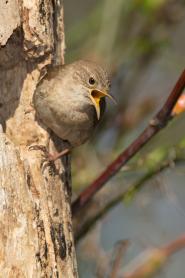 Another extinct genus of wren, Pachyplichas (meaning ‘thick thighs’), this time with separate North and South Island species, has also recently been described. P. yaldwyni, the South Island species (the largest wren yet discovered), is named after the ex-director of the National Museum in Wellington, while the North Island species is P. jagmi. Both P. yaldwyni and P. jagmi are also thought to have been flightless, as they had very reduced wing structures and sternum, where the flight muscles attach. They also had a robust pelvis and legs, and non-perching toes resembling those of the kiwi and weka. Like these birds, they spent their time running around on the ground.

The wrens belong to the single largest order of birds, the passerines, which make up more than half of modern bird species. The species described here are the only four passerines either known or thought to have been flightless. Why were they unique in this way? Undoubtedly, the fact that New Zealand, until recently, has lacked any mammal predators and has not had much in the way of small, ground-dwelling predators at all. The effect has been that, for some, there was no selective advantage for flight to avoid predators, and so the demands of flight have become disadvantageous for a relatively large number of New Zealand species.

The possible evolutionary history of the wrens can be summarised as follows:

Later, similar events also explain the evolution of separate North, South, and Stewart Island sub-species of the bush wren and the North and South Island rifleman. However, one might ask the question, ‘why did Traversia not sub-speciate?’ Possibly it did, but perhaps so recently that no evidence of clear differences in the bones so far identified has been found, whereas the two Pachyplichas species do show clear bone differences.

Some authors have argued that the rock wren and the bush wren are merely sub-species. While this is not generally accepted, it is acknowledged that they are very closely related (and have overlapping ranges), and given that their bones have been found together in the South Island, it is tempting to suggest that some sort of sympatric speciation may have taken place. Certainly, the Nelson locality with six fossil wren species gives clear evidence of niche partitioning. As has been shown for other bird species (where several related species living in the one area exploit different parts of it), the wrens would have been able to avoid competition by occupying slightly different niches, or exploiting slightly different resources.

Using the Stephens Island wren as an example, we can compare the ‘life cycle’ of a species with that of an organism.

Dendroscansor has short (but not thick) legs and a down-curved beak. There are a number of other families of birds with similar features, such as the ‘tree creepers’ and ‘wood creepers’ from South America, Australia, and North America. It seems highly probable that the reason for the similarity in features is due to a common lifestyle (that of running up and down trees, probing for insects under the bark and in crevices), rather than a common ancestry. 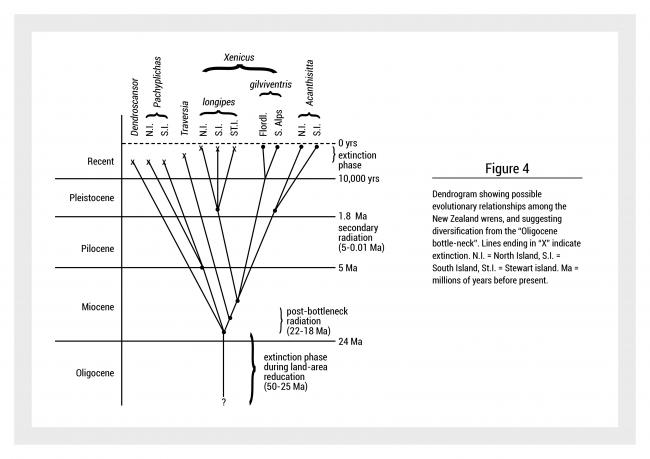 All too often, New Zealanders (including teachers) tend to think that overseas examples are better than our own. The wren story is important because it reminds us that local material can be as good as anything that the rest of the world can offer us (or in this case better, because the wrens have been evolving for 20 million years, while Darwin’s finches have only been doing it for five million years).

Having local examples to emphasise evolutionary ideas can only be beneficial to our students because a) they are easier to relate to and therefore more relevant; b) they show that New Zealand is part of the international operation of science and of evolution specifically; and c) we should use them whenever we can! In addition, the wren story reinforces the fact that it is by the collaboration and integration of different scientific disciplines that the true and complete picture of what has happened can be seen.

*From the initials of J.A. Grant-Mackie, who was supervisor of the researcher who first described Pachyplichas. (Ed.)

Cooper, A; Cooper, R.A.; Chambers, G.K (in prep.). The Oligocene marine transgression as a shaping influence on genetic diversity in New Zealand avifauna.