You are here: Planet Earth and Beyond » Spaceward Bound 2015

An engaging expedition in January brought together teachers and NASA researchers.

Spaceward Bound 2015 was organised by the New Zealand Astrobiology Initiative (NZAI) and focused on exploration of ‘extreme environments’, as related to astrobiology research. 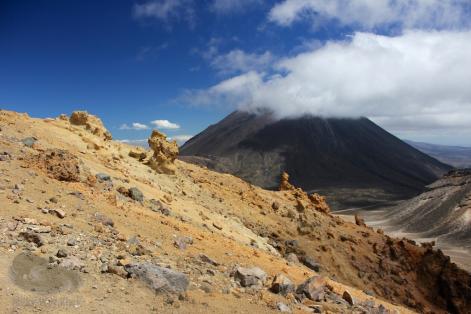 Above: The arid environment of Tongariro is an analogue for Mars. Photo source.

In January 2015, the New Zealand Astrobiology Initiative organised an engaging, six-day expedition for Kiwi educators and researchers, introducing them to the wonders of the Taupo Volcanic Zone in the central North Island.

New Zealand features some of the best sites in the world to study astrobiology-related extreme environments. The geographical set-up, dynamic and active geological setting, and the science capability of New Zealand all support the study of astrobiology.

Within its Taupo Volcanic Zone, New Zealand has unique extremophiles in the hot springs, and recent and current explosive volcanism. Other regions in the country include access to the K-Pg Boundary (Marlborough region) and the Dry Valleys of Antarctica.

New Zealand is also a world-leader in biosecurity (essential to planetary protection) and has a rich cultural heritage derived from exploration, as Polynesian and Europeans arrived here guided by the stars.

New Zealand’s scientists encompass most of the required fields in astrobiology: microbiology, ecology, biosecurity, physics, astronomy, radio astronomy and geology. This represents an accessible, yet rich, knowledge base of local expertise.

Fifty scientists, educators, teachers and students attended Spaceward Bound New Zealand 2015. Visitors and locals also participated in various activities at the headquarters and at field sites at geothermal locations, the Tongariro volcanic crossing and the active volcano at White Island. A public event using a drone and rover attracted about 200 people in Rotorua, a present-day geothermal field upon which a modern city has been built.

The expedition, besides being an excellent networking opportunity, promoted New Zealand as a significant astrobiology field research location, supporting the development of the New Zealand secondary schools education curriculum, but also encouraging university-level uptake of science related to astrobiology. Although astrobiology-related knowledge is taught in places as part of the Earth and Space Science (ESS) curriculum, until Spaceward Bound New Zealand 2015, there had been no national effort to integrate this field at educational and scientific research levels.

Click here for access to the full report on Spaceward Bound, including some great photos and extra information about astrobiology in New Zealand.